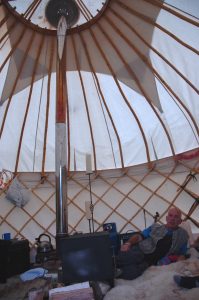 It must be around 15 years ago that I first went to qigong camp in a damp and windswept field in Devon – on the edge of Dartmoor. I set up my tiny nylon tent and as I lay in it – cold and a bit miserable – I saw a woman draw up in her estate car, laden with poles and canvas. I barely paid attention but when I roused myself an hour or so later I saw this magnificent construction and peeked in the doorway to see her reclining on a pile of sheepskins  in front of a roaring wood stove. I decided on the spot that if I ever came back I’d be in one of those.

Over the next couple of years I made two yurts. Two because the first one wasn’t much good – though in my defence the only instructions I had were a few brief and incomplete pages. By the time I made the second, I knew what I was doing.

I coppiced ash poles in Stanmer ParK, close to Sussex University. The woods there – like so many in the UK – were filled with abandoned coppiced trees. Coppicing – that marvellous working relationship between human and tree – once produced long straight poles for numerous purposes (fencing, tool handles, charcoal making etc.) and massively extended the longevity of the tree. I cut poles, stripped the bark, shaved the ends and – what a joy – sat by an outside fire as my homemade steaming box slowly softened the wood, allowing me to bend the roof and wall poles, and wrestle the roof wheel round a steel hoop. Then the poles were drilled, corded and varnished numerous times with fragrant linseed oil and true turpentine. Finally I measured every dimension, sent the numbers off, and a few weeks later received a purpose-sewn canvas covering.

I confess it’s hard work loading the yurt poles and canvas on top of a car, stuffing the boot with wood stove, chimney, tables, cooking stove and enough bits and pieces to furnish a small house, and then unloading it all and erecting the yurt. But when it’s done – as I think these pictures testify – it’s the source of profound comfort and deep joy. 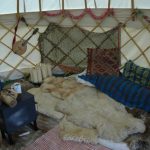 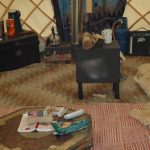 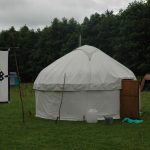 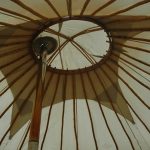 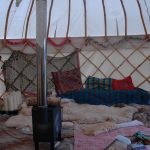 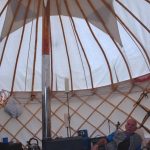