Why do we keep the upper back wide in qigong? 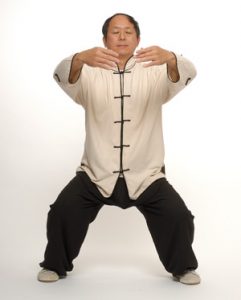 I can’t remember where I first heard about the importance of keeping the upper back wide, with the shoulder blades sliding away from each other, in the practice of qigong and the internal martial arts.

Like many things, I practised what I was told, and it was only slowly that I began to understand why.

A Chinese medicine teacher I once had remarked that the human body has a major design fault: it is both vertical and alive. Being alive, it has yang energy (whose nature is to rise) and being vertical that yang energy can easily rise excessively.

Physically this can result in disorders such as high blood pressure, dizziness, strokes, headaches, sense organ problems and more. These are all likely to increase as we age since yin (which serves as a sinking counterforce to uprising yang) starts to decline as we get older. Since the lower body belongs to yin, these symptoms of excessively uprising yang are usually accompanied by weakness, instability and uncertainty in the legs and feet with increased risk of falling.

Emotionally and mentally, uprising yang can disturb the heart/mind (known as the ‘shen’ in Chinese). When the heart/mind is agitated by excessive rising of heat and yang, we easily get anxious, restless, worried, have trouble sleeping and generally feel unstable and unrooted.

This is why the emphasis in what are known in China as the ‘internal arts’ is on rooting and sinking to counteract this wayward tendency of yang. We rarely focus on the head (especially in the early days of practice) but rather on the feet and lower body – sinking the weight, grounding into the earth and lowering the centre of gravity.

The second important way we lower and sink through the body is by relaxing the chest (as opposed to lifting it) and learning to take the breath down into the lower core (the lower back and sides and deep into the lower abdomen) rather than into the upper chest, or indeed (consciously) into the chest at all. In fact we want to keep the chest soft, relaxed and quiet so that the two main chest organs – the heart and lung – are also quiet.

This is the opposite of what is known as chest breathing which is often linked to feelings of anxiety, stress and even panic. While the Chinese ‘energetic’ mechanism is as described above (uprising yang disturbs the heart/mind), we know from a scientific perspective that chest breathing, especially if rapid, can result in hyperventilation and thus increased levels of oxygen and reduced levels of carbon dioxide (CO2). As a result, blood vessels contract, blood pressure rises, and there is reduced blood flow to the brain (affecting concentration, attention and effective functioning etc.). If there is a full-blown panic attack, the remedy is to breathe in and out of a bag in order to raise CO2 levels.

So to come back to the opening question … why do we spread and widen the upper back? The answer is that if (whether just standing, and especially when moving and raising the arms) we allow the shoulder blades to contract towards each other, that inevitably thrusts the upper chest forwards and upwards. The result is that the body’s centre of gravity rises, and the breath  becomes shallow and confined to the upper chest.

So, when we widen the arms outwards, we make sure that we don’t draw the elbows back towards the body but keep a smooth and natural curve from one hand to the other, through the back.

The big mystery is why – in the West – we train our professional martial personnel (i.e. soldiers) to stand with their chests thrust up and out like cockerels.

If you want to learn how to put this into practice and depend your understanding if qigong, why not come to my classes or workshops?