Exercise in the young 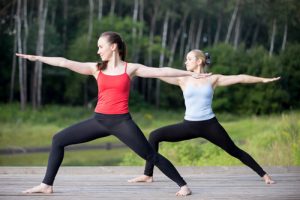 I hated sports at school … really hated it. Cold showers, the overpowering smell of sweat and feet, hopeless at the sports they offered, last to be picked for any team. I always thought that final humiliation was because I was rubbish but I now realise that any confidence I might have had was knocked out of me, and because as an August child I was the youngest in my year.

It took me years to discover the delights of exercising the body – not with rugby, cricket and athletics which is all my school offered – but with things like dance and yoga and tai chi and qigong and cycling and walking.

The reason I’m reflecting on this is because of a couple of today’s news stories. The first is a study published in Evidence-Based Practice in Child and Adolescent Mental Health journal which reports that exercise can help reduce depression in teenagers. No surprise there … exercise has already been shown to have powerful anti-depressant effects in adults. But this finding is particularly important for teenagers since a. there is a growing epidemic of anxiety and depression in the young, and b. because other methods such as medication and therapy result in only moderate responses with high levels of relapse.

The second story concerns a suggestion by Prof Neena Modi – a top UK paediatrician – that parents should get an extra vote for every child they have, to push governments into addressing the crisis in child poverty and obesity (which are strongly linked). Obese children who go into adulthood obese are likely to lose 10 to 20 years of healthy life.

Now exercise can do little for poverty and is only one factor in countering obesity. Without other, especially dietary changes, it is unlikely to be successful on its own. However, appropriate exercise and enjoyment of the body foster a whole host of positive qualities – confidence, hardiness, improved self-image, positivity, resilience etc. – that will have a massive impact on a child’s sense of self-worth with possible spin-off improvements in diet and other aspects of lifestyle.

Going back to the first study, one finding was that the challenge of getting teenagers to exercise was to get them motivated. Reflecting on my own childhood experiences I would suggest that there is at least one kind of physical activity that will appeal to every person. So schools and after-hours activities should be offering the greatest range … not just conventional sports but also martial arts, yoga, archery, dance, swimming, tennis, table tennis, walking, climbing … whatever. The thing about exercise is that as soon as we find something we like and are good at, the more we want to do it, and that positive feeling can extend to other physical practices – indeed to many different life challenges.

It’s also important to remember that – as with adults – some children thrive on competition and some hate it. Fear of failure can drive many children away from any thought of sport for example. But many of these options I list don’t have or need a competitive element, unless perhaps a degree of self-competition.

Finally, in the UK at least, I think it’s fair to say that we have regressed back to the 19th century in terms of child health and wellbeing. In those days it was malnutrition, stunted growth, slum housing, air pollution from coal smoke etc. The advent of the welfare state changed things beyond all recognition and child health vastly improved. But under the market-first, society-last mismanagement of our society, a version of these conditions has returned. Inadequate housing for the poor, vast income inequality, disastrous junk food diets, lack of outdoor play, addiction to social media, air pollution from traffic etc.

As Professor Modi complains, there is little understanding of how poor lifestyle and health in early life impacts on lifetime health and wellbeing and failure to act and invest now leads to significant suffering and untold expense in the future.