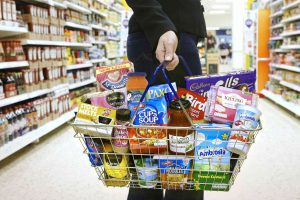 Hot on the heels of the news that ultra-processed food makes up more than half of the average Briton’s diet (and 60% of the average American’s), comes a French report that consumption of these ‘food-like substances’ significantly increases the risk of cancer. In fact adding just 10% of ultra-processed food to the diet increases the cancer risk by 12%.

Author Michael Pollan famously coined the phrase “Eat food. Not too much. Mostly plants”. By eat food, he meant real food – stuff our grandparents would have recognised.

Real food can be processed of course. Tea is, coffee is, cheese is. Processing basic ingredients by age-old methods (fermentation for example) can transform them into delicious and healthy dietary staples.

But that’s quite different from ultra-processing. Here the actual food ingredient content is minimal. Concocted in factories, they are defined as “formulations made mostly or entirely from substances derived from foods and additives”.

Bakers, millers, cheese makers who adulterated their food used to be paraded through the streets and chained in the stocks for everyone to come and throw refuse at. Nowadays, food adulterers – whose single motive is profit – are some of the largest and richest corporations on the planet.

So what’s going on with these cancer findings? The truth is they don’t know. Some commentators think it must be a specific ingredient in the toxic mix that goes into pot noodles, processed bread, ‘shelf-stable ready meals’, cakes and confectionery, fizzy drinks. Find the ingredient, remove it, and all will be well. But which ingredient is it? Which additives, flavour enhancers, colourings, preservatives, emulsifiers, sugars, cheap fats …. ?

I suppose a single deadly bullet is a faint possibility, but what kind of disconnected thinking supposes that these industrial foods were ever OK? Hunting for that single toxic ingredient, rather than a synergistic relationship between all of them and this natural human body, obscures the harm caused by the Big Food industry.

And cancer, of course, is only one possible outcome. What about obesity, and diabetes, and dementia, and heart disease and depression and anxiety – the ever-growing chronic diseases that are crippling populations that follow modern Western lifestyles?

So … preaching to the converted I know … let’s return to the beauty of natural foods, sustainably grown, lovingly prepared, and let’s do what we can to kick this junk out of supermarkets and hospitals (!), and schools, and prisons.

This idea is not new. Here are links (Link 1   Link 2) to a vision statement from the Natural Foods Union – a loose conglomerate of natural food shops. At that time I was still at Infinity Foods and worked on drafting the document with others. Reading it now, exactly the same ideas, ideals and pressing needs apply.